FREE SHIPPING anywhere within the US! Tea plays a healthy role in maintaining the human body, mind, and spirit according to an impressive lineup of speakers participating in a colloquium hosted by the University of California, Davis. 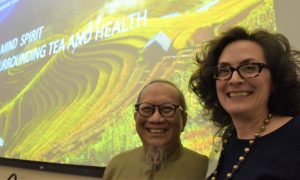 Several years ago, Professor Katharine Burnett proposed that the university undertake a Global Tea Initiative (GTI) like its outreach in wine, beer, and specialty coffee. The colloquium is one aspect. Burnett noted more than 3,000 research papers demonstrate the myriad health benefits of tea drinking.

University quality research and large-scale demonstrations are reassuring, but as one of the key speakers observed… The fact that tea is amazingly good for you is very, very old news. 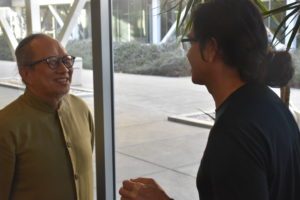 Wing-chi Ip is a remarkable resource in the world of tea. A tea master, designer, artist, expert in Yixing pottery, founder of the Hong Kong Tea Association, professor at Shuren University, and owner of several tea rooms, including the famous LockChamuseum and tea center in Hong Kong, Mr. Ip calls himself Mr. Leaf (the Chinese character for Ip is leaf).

Tea has been cultivated since Neolithic times in China where it was first used as a medicine. Ip traced the Chinese characters describing medicine and food to the same origin. The origin of language is obscured by time, but the origin of individual languages is subject to very precise study. Tea is derived from collective terms for “herbs that cure sickness,” he said. Ip noted that Chinese medicine is based on the premise that “the best doctors cure before the sickness happens,” not after their patients become sick. This is why tea has such prominence.

Various medicines cure different diseases, but tea is the medicine for all kinds of diseases, explained Ip. This is because tea “is the most yin, of yins” as it lowers one’s fire. “Fire (inflammation) is the origin of all diseases,” he explained. He then cited the 10 virtues of tea, first published by physician Liu Zhenliang of the Tang dynasty (618-906 AD).

Since “we are what we eat” much can be learned from what passes through the body, said Professor Yvonne Wan, vice chair for research in the Department of Pathology at U.C. Davis. Wan is an expert on Gut Microbiota, Tea and Health. Her self-introduction drew a big laugh – “just call me Dr. Poo.”

We may look alike but no one has the same gut. The microbiome within our bodies consists of trillions of micro-organisms that dictate many aspects of our health. These microbiomes differ greatly from one individual to the next, only 10–20 percent of the bacteria you have in your gut is shared with anyone else. Diet, lifestyle, weight, and even our moods can influence the gut.

Dr. Wan’s studies reveal the healthful impact of tea for people overweight largely due to a western diet heavy in fats and sugars. Her findings regarding liver health and obesity provide a strong basis for tea drinking according to Wan. “Antibiotics eliminate liver inflammation in control diet-fed mice, but not in Wester diet-fed mice,” she said. “EGCG burns fat, reduces serum lipids, and improves insulin sensitivity in Western diet-fed mice,” she said. Those who eat lots of leaves and leafy vegetables also reduce difficulties with constipation and digestive inflammation. Inflammation can be traced to diabetes II, arthritis, autoimmune diseases, neurological diseases, pulmonary diseases, cancer, cardiovascular diseases, and Alzheimer’s. She cited several studies pointing to the advantages of drinking pu’er, a dark tea from southern china aged and often compressed. It produces a broth rich in amino acids and other beneficial compounds.

Individuals whose diets include lots of plant-based foods have a much more diverse microbiome which may be why they enjoy greater health.

Epigenetic Impact
Researcher Weronica Ek with the Department of Immunology, Genetics and Pathology at Uppsala University, in Sweden discussed recent findings on the unique and beneficial effects of drinking tea for women. Epigenetic changes are those that alter gene expression. These changes can be passed down for generations. Drinking tea could literally be life changing.

“Lifestyle factors, such as food choices and exposure to chemicals, can alter DNA methylation and lead to changes in gene activity,” according to the study’s abstract. These epigenetic changes, however, do not alter the DNA sequence.

In studies on health benefits of diets, many other factors are usually involved, she cautioned. Tea drinkers, for example, may be more health-conscious and they smoke less than the general population. There is a need for larger follow-up studies, “however, previous studies confirm parts of our results,” she said. Eck stressed the need for additional research but finds that epigenetic changes “are certainly intriguing and may provide some insight into how the compounds in tea influence health.”

Back to blog
Liquid error: Could not find asset snippets/wholesale-now-settings.liquid